Last week, the all-new 2019 Suzuki Jimny finally broke cover. With dozens upon dozens of blurry shots and camo-covered SUV’s having being spotted in various locations, the box on wheels is back and boxy than ever before.

Still, there are a few things the Japanese manufacturer hasn’t revealed regarding what lies beneath Jimny’s boxy shape. They have confirmed the model will continue to uses a ladder frame chassis and on home soil (Japan), two variants will be available; the regular Jimny and the Jimny Sierra.

The standard 2019 Suzuki Jimny draws power from a 660cc engine whereas the Jimny Sierra which is said to be the one to go on sale outside of Japan will boast a larger 1.5-litre four-cylinder engine with larger unpainted bumpers and extended fenders.

According to the manufacturer, the 2019 Jimny will use a part-time all-wheel-drive system along with a low-range option. A five-speed manual gearbox is standard, and there is an optional four-speed automatic on offer.

The model is also available in a variety of eye-catching colours including Jungle Green and four others. There are also three two-colour finishes to choose from as well.

What to expect inside the 2019 Suzuki Jimny

One of, if not the biggest change for 2019 is the upgraded interior. While still sticking with a rugged speedometer and machined bolts on the passenger side dashboard, the latest Jimny receives a seven-inch infotainment system, cruise control, automatic climate control, multi-function steering wheel and autonomous emergency braking system.

Also new for 2019 is the second lever which we’ve been informed engages the four-wheel-drive system. In the previous model, 4WD modes were engaged via buttons.

More details on the international version of the 2019 Suzuki Jimny and worldwide availability should be revealed soon, stay tuned. 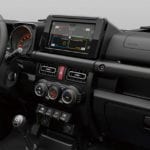 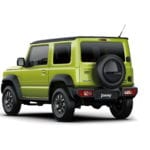 The all-new BMW 8-series arrives in style, wants to be THE sports car 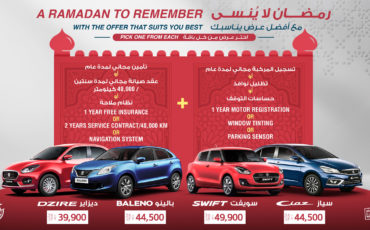 A Ramadan to remember with Suzuki in 2020. Customers can indulge themselves in a variety of… 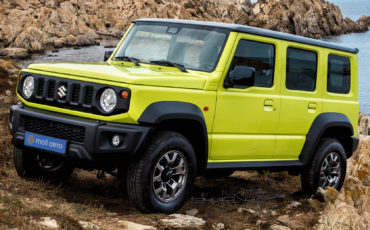 Sometime last year, unofficial renderings of a four-door Suzuki Jimny surfaced and were created for a… Not too long ago, renderings of the 2021 Hilux surfaced online showcasing the model receiving a…

Export cars, why buy from the UAE?

2020 Toyota C-HR, crossover to the wild side