Ferrari has unexpectedly announced a successor to the ageing California and newer T variant. Given the Ferrari Portofino nameplate, plenty of enhancements can be found inside, outside and underneath.

The new model benefits from the latest Ferrari styling evident on 812 Superfast and GTC4Lusso models. Providing an intimidating front end, Ferrari Portofino models appear much more aggressive than its predecessor; however, it will retain the hard-top folding roof that recesses behind the rear seats.

The interior is fitted with an identical steering wheel to modern Ferrari’s. Whereas the widescreen multimedia system has been lifted straight from the GTC4Lusso.

Driving the rear wheels of Ferrari’s latest entry-level model is an identical 3.9-litre twin-turbo V8 delivering an extra 38 hp. Now with 560 horsepower, the hard-top convertible model launches to 100 km/h in 3.5 seconds before hitting a top speed of 320 km/h.

Ferrari has made other changes to the motor besides cranking out additional power. New pistons and con-rods feature a new design along with a one-piece cast exhaust header cuts out turbo lag and increases throttle response.

A new sports exhaust system and variable boost management system allows the motor to pump out additional hp without sacrificing fuel economy which is said to be increased.

Other mechanical components have been tweaked or added including electric power steering and Ferrari’s third generation rear differential. The magnetorheological damping system has been altered and Portofino’s ride on an all-aluminium chassis.

The Ferrari Portofino will make its debut next month in Frankfurt. 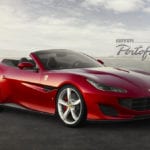 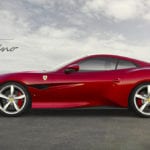