Throughout the year, McLaren has teased a new hypercar they’ve been not so secretly working on. Taunted as the P15, the wraps have finally been lifted, and the McLaren Senna has taken the automotive world by storm.

Jaw-dropping from every angle, McLaren’s latest dream machine is built on top a carbon-fibre chassis. Weighing in at 1,198 kilos, the McLaren Senna is the lightest road car the British manufacturer has ever created.

Beside model being a mobile piece of art, a flurry of advanced aerodynamics are evident. Front and rear active aerodynamics raise downforce and aero control while movable flaps hide beneath the air intakes and the enlarged rear spoiler pushes the back end closer to the ground at high speeds.

Hiding beneath the aggressive exterior is an equally aggressive 4.0-litre twin-turbo V8 petrol engine driving the rear axle. Mated to a seven-speed dual-clutch transmission, 789 horsepower screams out fo the tailpipes and allows the McLaren Senna to accelerate from 0-100 km/h in lighting quick 2.5 seconds!

McLaren claims their latest hypercar uses one of the most advanced braking systems ever seen. Combining carbon ceramic brakes and years of motorsport technologies, the McLaren Senna rides on a custom set of Pirelli P Zero Trofeo R tyres explicitly designed for the track but are approved for the road.

Each of the two doors are built from lightweight carbon fibre and both feature a unique two-piece glass pane. By allowing more light into the cabin, occupants can soak up the minimalistic yet technologically advanced interior.

A single free standing touchscreen multimedia interface stands out with three engaging toggle switches. Engine start button and window switches aren’t in their traditional locations. Instead, McLaren has moved them to the roof panel.

One example of this epic piece of machinery will set you back around $ 1 million or AED 3,673,100, and as of writing, every single Senna has been accounted for. The last model built was auctioned off for an astonishing $2.7 million of AED 9,917,370.

The new McLaren Senna is expected to be one of many highlights at next years, Geneva Motor Show, while production is set to start in late 2018.

The McLaren Senna shares its name with Legendary Brazilian Formula One driver Ayrton Senna who happened to win no less than three world titles racing for the British manufacturer.

Dubicars.com has new McLaren and used McLaren for sale in Dubai. 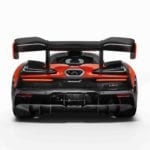 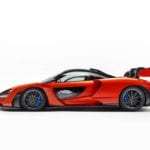 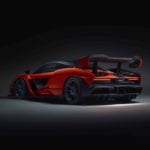