Over the past few months, a two-door version of the 2018 Toyota Yaris GRMN has already been announced and confirmed. Spy photographers have snapped up a four-door model this time.

Similar to that of the two-door version, four-door 2018 Toyota Yaris GRMN wear an aggressive body kit which includes a rear mounted spoiler, unique bumpers, 17-inch BBS rims on each corner with a high-performance braking system hiding behind.

Interior pictures have yet to be seen, although it’s safe to say sportier seats will be bolted up front, aluminium foot pedals and select features from the Toyota GT86 including the steering wheel.

Power is drawn from a 1.8-litre supercharged four-cylinder petrol motor rated at 202 horsepower. Powering the front wheels via a limited-slip differential with a six-speed manual gearbox, Toyota has yet to release official 0-100 times or a top speed.

We can guarantee it will be quicker than the standard Yaris seeing as base models are rated at 86 and 105 horsepower respectively. Both engines max out at 165 and 175 km/h while accelerating to 100 in 13.5 and 11 seconds.

It still remains a mystery what markets the 2018 Toyota Yaris GRMN will be available in. Fingers crossed, they bring the hot hatch to the GCC region.

When it finally launches around the world, it’ll serve as a worthy rival to the punchy Volkswagen Polo GTI and Ford Fiesta ST hatchbacks.

There’s still a few months until the 2018 Yaris GRMN launches. Until then, we’ve got new Toyota Yaris and used Toyota Yaris for sale in Dubai, Sharjah, Abu Dhabi and Ajman. 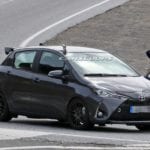