General Motors has revealed the new 2019 Chevrolet Camaro ZL1 1LE with a familiar face and an optional updated version of the 10-speed automatic gearbox.

When fitted with the 10-speed box, the 2019 ZL1 1LE claims to be “several seconds” faster on long tracks such as the iconic Nurburgring compared to the six-speed manual version.

To achieve this, Chevrolet has tuned the transmission, performance traction management system and the electronic limited slip differential just for the 2019 ZL1 1LE. Further recalibration has been done on the Multimatic DSSV dampers to cope with the quicker gear changes.

“Adding an automatic transmission is another example of the Camaro Portfolio delivering what customers want. This ultimate 1LE is another appealing option that is true to its racing heritage,” explained Steve Majoros, director of Chevrolet passenger car and crossover marketing.

Besides the pre-facelift front end, the 2019 Chevrolet Camaro ZL1 1LE package adds a carbon rear wing, a set of lightweight forged alloys and a fixed rear bench. All of this plus a few other bits here and there result in a loss of 22.6 kilos.

Bellowing beneath the bonnet is a fire-breathing 6.2-litre supercharged V8 petrol engine rated at 650 hp and 881 Nm of torque. Connected to a previously mentioned 10-speed automatic gearbox, the monumentous amount of power is sent to the rear wheels. 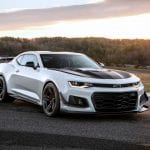 Honda HR-V arrives in the UAE