With the LA Motor Show just around the corner, one has to expect leaks to sprout all over the place when it comes to what one can expect to be on show. One of the new vehicles that are supposed to be unveiled is the new 2020 Porsche 911 if which someone has already managed to get a hold of the pictures and post them online.

Unfortunately, the images are of low quality but they do give us a clearer picture of what to expect come the end of the week.

The 2020 Porsche 911 retains the round headlights and bold lines which have been further refined but gains a few larger assets most notably around the back and restyled wing mirrors.

Speaking of which, one of the most significant changes of the latest 911 is the slimmer lights flanking either side appearing and connected by an extended light strip.

No shots of the interior surfaced, although spy shots were posted online a few weeks ago showing a new centre console with a smaller gear lever, a new wraparound dashboard and new toggle switches.

More information regarding the engine, dimensions and high-resolution pictures of the 2020 Porsche 911 is expected to be released on the 27th of November, and the model itself is said to debut at the LA Motor Show which starts at the end of the week.

Planning an upgrade and want to sell your car? Starting at just AED 99 you can sell your car today on Dubicars. 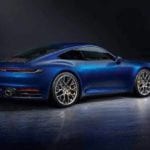 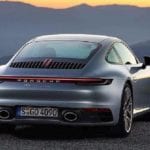 New Audi A6 arrives in UAE, gets Launch Edition