It’s been quite some time since Nissan gave us a new Patrol, in fact, In its current guise, the Y62 Patrol has been sold in the UAE and surrounding countries since 2010 with a hand full of updates here and there. But that’s all about to change as the 2021 Nissan Patrol has been spotted testing in the UAE.

The 2021 Nissan Patrol is expected to retain the 5.6-litre V8 petrol engine and will most likely keep the V6 as an entry-level option. Those hoping for an electrified version may have to look elsewhere.

According to sources, Nissan apparently feels that adding electric motors and a battery pack to the full-size SUV, as buyers aren’t as interested in saving fuel. Adding these components will add more weight to an already heavy vehicle.

Although it is claimed that Nissan has stated this is the reason as to why they don’t want to do it, we can’t rule out a possible hybrid or plug-in hybrid versions going on sale in other markets to reduce its emissions footprints.

While it may be hard to spot what’s new under the heavy black covering, but as it stands, the “new model” will stay true to the Patrol’s tough exterior with minor modifications including modern styling tweaks, a new front grille and LED headlights.

Planning an upgrade and want to sell your car in UAE? Starting at AED 99, you can advertise your car for sale today on Dubicars 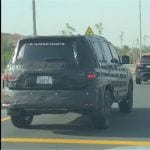 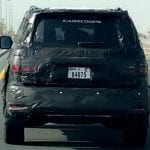