After successfully setting a blistering lap time around the legendary Nordschleife (7 minutes and 51.7 seconds), the Alfa Romeo Stelvio Quadrifoglio is now available in showrooms across the UAE and the Middle East.

Not only is the Alfa Romeo Stelvio Quadrifoglio visually striking, but the Italian SUV also provides quite a kick from an aluminium 2.9-litre Bi-Turbo petrol engine connected to an eight-speed automatic gearbox. Good for 510 horsepower at 6,500 rpm and maximum torque of 600 Nm between 2,500 to 5,000 rpm, the Stelvio launches from 0-100 km/h in just 3.8 seconds! Before hitting a top speed of 283 km/h.

That’s quicker than an SLS AMG!

With such an engine surely fuel economy will take a toll? Surprisingly not, as the Alfa Romeo Stelvio Quadrifoglio is “incredibly efficient” in regards to fuel consumption and emissions according to the Italian manufacturer. This is thanks to its electronically controlled cylinder activation system and “sailing” function, available in Advanced Efficiency driving mode.

For the first time ever, the impressive engine is paired with Alfa’s signature Q4 all-wheel-drive system which is said to offer “unbeatable performance, traction, driving pleasure and safety in all situations.” The SUV is also fitted with the exclusive Alfa Chassis Domain Control unit, Alfa Active Torque Vectoring and Alfa Active Suspension as standard. The latter of the three actively controls the shock absorbers and suspension.

Another unique feature to the Stelvio Q is the electromechanical Integrated Brake System or IBS which is an Alfa exclusive. First appearing on the Guilia, the system offers swift response and stopping distance no matter what surface and conveniently, it weighs less compared to conventional braking systems. Furthermore, a high-performance carbon-ceramic system is optionally available.

Offering impeccable handling and comfort thanks to the Stelvio’s suspension layout paired with the exclusive AlfaLink technology. At the front, double wishbone system with semi-virtual steering axle while at the back, a four-and-a-half link Multilink system.

The Alfa Romeo Stelvio Quadrifoglio currently holds two best-in-class titles that make it the highest-performing SUV in its segment. Weighing in at just 1,830 kilos, it offers the best weight to power ratio in its category (3.6kg/hp) as well as the best specific power (176 hp/L).

These impressive results are achieved thanks to perfect weight distribution between the two axles as well as the use of ultra-lightweight materials such as carbon fibre and aluminium. The former is found on the driveshaft while the latter is used for the engine, suspension, doors, brakes, wheel arches, bonnet and tailgate.

Inside the Alfa Romeo Stelvio Quadrifoglio

The Stelvio’s sporty nature continues inside of course with a touch of traditional Italian flair. A perfect mix of leather, carbon fibre and Alcantara can be found covering the entire cabin.

Dubicars.com has used Alfa Romeo for sale in Dubai and Sharjah. 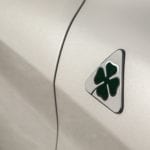