With the Ferrari 458 reaching the end of its life cycle, Ferrari has already announced its predecessor. The new Ferrari 488 will compete with the Lamborghini Huracan and Mclaren 650s. With the 488 Ferrari on the way in, we wave goodbye to the naturally aspirated 4.5 litre engine from the 458, and say hello to the new 3.9 litre turbocharged petrol engine of the 488.

Despite the smaller engine, the 488 produces more power (661 horsepower compared to 597) than the 458’s 4.5 litre v8, and it’s 5 km/h faster! The gearbox remains the same seven-speed dual clutch automatic with launch control. As for torque, the Ferrari 488 pushes out 760 Nm that’s even more than the current 12 cylinder Ferrari F12 Berlinetta, which produces 689 Nm of torque. 0-100 km/h times have improved with the new engine, with the 488 achieving the feat in 3.4 seconds whereas the standard 458 does it in 3.4 seconds.

The new Ferrari has a 50% increase of downforce compared to its predecessor, all thanks to the active aerodynamics at the back of the vehicle. As the 488 cuts through the air, air is funnelled through the bottom of the glass engine cover to the rear spoiler. This not only pushes the car downwards, it reduces drag as well. Also, Ferrari has added an ion sensing system to the engine which helps control the ignition timing. This gives it that extra kick. With 20-inch rims, Brembo brakes similar to the ones the LaFerrari have greatly improves stopping time compared to the 458. Inside, the cockpit its very similar to the predecessor, 458. The infotainment display that lays in the dashboard shows Bluetooth options, media settings and navigation. It will however be given a new interface and graphics. The multifunction steering wheel is home to the Manettino dial which adjusts the car to the driver’s preference or to adapt the car to the surface condition such as rain. It can also be used to turn the electronic stabilisation on or off. There are various buttons to start the car, adjust the suspension, indicators, high-beams and window wipers. Behind the wheel are the traditional paddle shifters. Optional extras include carbon fibre trim on the centre console and dashboard, a 12-speaker 1280 watt stereo system and the same telemetry system found in LaFerrari. The seats have also received a fresh look, now looking similar to the California’s as is the case with the inner door panels.

A Spider version of the Ferrari 488 was spotted a few months ago, camouflaged and wrapped in a distracting vinyl but hasn’t been officially announced by the Italian sports car company. From the prototype, the most noticeable differences are the convertible roof and flat engine cover compared to the slanted glass engine covering on the 488 GTB.

And in case you wondered why Ferrari gave this vehicle the title 488: Each cylinder is 488 cubic centimetres in volume. The GTB part stands for Grand Tourismo Berlinetta. 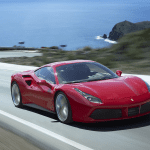 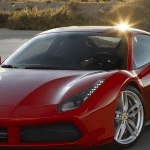 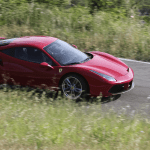 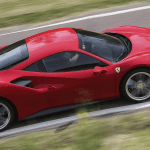 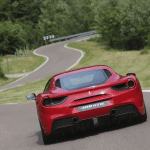 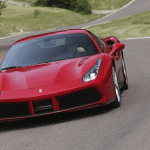 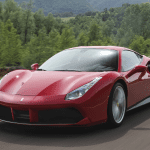