Nissan is in attendance at the Futures 3.0 event in Europe to unveil their latest Leaf hybrid model. They also appear to be hiding something away from us, but luckily this is the day of the internet, and someone out there has stumbled across a teaser for the new Nissan Leaf Nismo edition.

Little information is known about the Nissan Nismo Leaf as this is the clearest picture to have surfaced. However, the image does reveal what to expect.

A new front bumper with larger air-intakes is evident with LED fog lights flanking either side, red highlights including a red front lip spoiler, thick black stripe covering the hood and an exclusive set of alloy rims covering each corner.

Earlier this year, Nissan revealed a redesigned Leaf hybrid bundled with a 40 kWh lithium-ion battery pack combined with an electronic motor to generate 147 horsepower and 319 Nm of torque.

There is no word if Nissan Leaf Nismo hybrids benefit from additional power. Although it would be a little odd if Nissan doesn’t add some extra juice.

While nothing has been set in stone, sources indicate the visually enhanced Leaf is destined for the Tokyo Motor Show later this year. Plans to put the model into production have already been confirmed.

We’ve got our fingers crossed the model debuts sooner rather than later, as Dubai customers who buy select plug-in hybrids benefit from a wide range of incentives including free parking and Salik.

Dubicars.com has new Nissan Leaf for sale in Dubai. 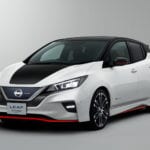 McLaren 3-seater takes to the asphalt for the first time 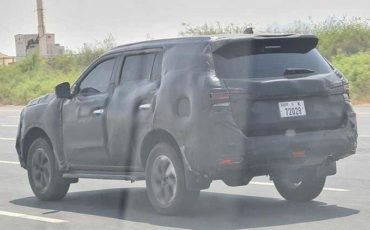