On September 18, 2013, production of a plug-in super car known as the Porsche 918 started in Stuttgart, Germany. Only 918 vehicles were to be built and the last one was just completed in June 2015. It now joins the rare legends like Porsche’s 904 Carrera GTS, the 911 GT1 and the Carrera GT. Unveiled in 2010, there was already a huge demand for the 918 from potential buyers and three years later the green light was given to put the 918 into production. Now, after two years, every one of Porsche’s plug-in supercars have been built and sold. The final 918 rolled off the production line coated in a maroon finish bearing a badge near the engine under some mesh, stating that it is in fact #918 of 918. It had been bought before it was finished. A common phenomenon with limited quantity cars is that the ones with special numbers such as the first and last car built (#1 and #918 respectively) are extra sought after. As well as that, vehicles bearing numbers such as #777 and #111 are often snapped up before #110 and #776, for example. All Porsche 918’s were given the spider title as they all came equipped with a removable hard top roof. Two variants were available, one being the standard Porsche 918 and the other the optional Porsche 918 Weissach package. Both came with the same 4.6 litre 8-cylinder petrol engine, two electric motors and a 6.8-kilowatt liquid-cooled lithium ion battery. Together these produce an impressive 887 horsepower. The difference is that the Weissach package lightens the car by 60 kilos and makes it able to do 0-100km/h in 2.6 seconds compared to the standard version’s 2.8 seconds. Both come fitted with a seven-speed auto/manual gearbox with paddle shifters. Built to compete with the Ferrari LaFerrari and Mclaren’s P1, below is a comparison between the three.

The technology used in the 918 is extremely impressive and has been utilised in other Porsches. For example, adaptive rear axle steering and fully variable aerodynamics are prominent features in Porsche’s  911 GT3 and GT3 RS. Other components such as regenerative braking system, full carbon fibre body and the exceptionally robust and super efficient hybrid power unit will also make their way into future Porsches.

With the final 918 being built, many car enthusiasts around the world will shed a tear. However, fear not as Porsche have already mentioned a successor is in the pipeline.

To snap up one of these no longer produced vehicles, check out our new Porsche 918 and used Porsche 918 for sale in Dubai on dubicars.com. 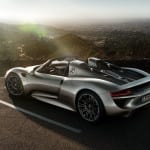