Earlier in the year at the New York Motor Show, Toyota showed off their latest concept, the Toyota TJ SUV. They dodged every question aimed at them if we would see the model launch in the near future. With a recent trademark filing, could we witness the FT-4X see the light of day?

Designed for the “younger” generation, select members of Toyota claimed the FT-4X was 75% production ready at the convention. With its retro styling cues, the model features a rear end that opens in two unique ways both horizontally and vertically as well as other quirky features.

The Japanese marquee hasn’t revealed any information about the Toyota TJ, but we expect with the trademark announced, an announcement of the model is only a matter of weeks away.

Could we see a successor to the much loved Toyota FJ Cruiser shortly? The upcoming Dubai International Motor Show would be the perfect place to unveil the new model.

Due to the FJ’s lovable nature in the region and it’s ability to traverse the harsh landscapes on offer, the Toyota TJ will certainly be a hit across the Middle East.

Until Toyota publish any information about the model, we’ll patiently wait and keep you updated when more is revealed. Let us know what you think below. Do you love it? Or is its styling a bit too much for you?

Looking for an offroader to carve your way through the desert? We’ve got new Toyota FJ Cruiser and used FJ Cruiser for sale in Dubai, Sharjah and Abu Dhabi. 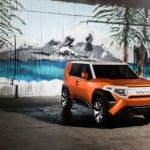 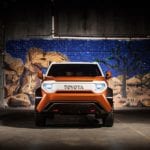