A decade you say? Yes, the current Ford Fiesta’s looks date back all the way to a concept in 2007. Over the years, Ford has kept the Fiesta in check. Every year, they offered customers minor facelifts and added extras, but as time goes by (and so does the competition), it’s time for an upgrade.

Softer materials take over from harder rubber coated plastic bits of current generation models, but that’s not all. More driver assists and enhanced entertainment features are said to join the menu as added bonuses to lure drivers back.

One major downside to current Ford Fiesta’s (and a lot of readers will agree to this as well) is how small the rear of the car is. Now we all know that it is supposed to be a micro hatchback, but it’s far too cramped. Ford has acknowledged this issue and for the next generation of Fiesta’s, expect more rear legroom and space.

Ford does have a few extra months to draw in customers as 2017 Volkswagen Polo’s aren’t due out until midway through 2017. Other rivals such as the Chevrolet Sonic, have already launched their latest models, Suzuki is keeping a tight lip on the Swift, Honda hasn’t even squeaked about the Fit and Toyota majorly overhauled the Yaris in 2016 trim.

Only the five-door model has been spotted testing which leaves us with the dilemma of whether or not they continue producing a sedan and three-door version.

Engine options aren’t mentioned, and it’s unknown if the four-cylinder petrol unit will stay onboard or if it will be replaced by a three-cylinder motor or an eco-boost engine. Price in the UK is tagged as £13,000 (approx. AED 63,300).

Looking for an American compact hatchback, we’ve got new Ford Fiesta and used Ford Fiesta for sale in Dubai, Sharjah and Abu Dhabi. 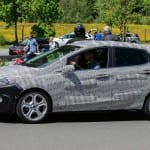 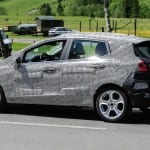 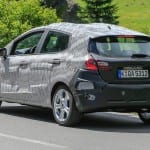 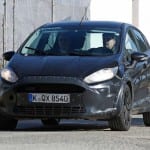 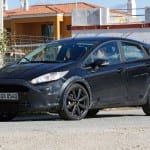 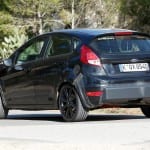