While standard and Turbo trims of the 2017 Porsche Panamera are set to launch later this year and early next year, other trim levels are mentioned but as the weeks go by more and more models are speculated. Some may just be rumours, but others are a reality as is the case with an extended wheelbase (EWB).

2017 Panamera models are built on the MSB platform which allows for extra wiggle room regarding wheelbase. Long-wheelbase models are to be extended by 150 mm giving rear passengers more leg room. With the new model entering production, it gives Porsche a bigger push in markets such as China where these models are favourable.

LWB models will run with a selection of engines including; two petrol V8 motors, both twin-turbo, charged V8’s and in particular regions, a V8 diesel can all be attached to an automatic gearbox with drive being sent to the rear or all four wheels.

Plug-in hybrid models will follow suit at a later date as Porsche has announced two electric models are on the way but they haven’t provided a date.

2017 Panamera models are scheduled to launch in January 2017 in the GCC markets and start at AED 483,700. Expect a higher price point attached to the long-wheel base version and they too will available at the same time.

Now we wait for the German manufacturer to announce the luscious shooting brake model that has been unofficially rendered dozens of times. 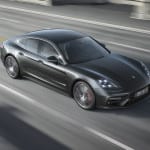 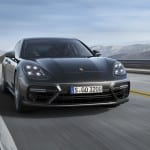 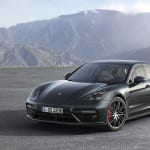