Infiniti just can’t keep their new models a surprise until there grand debut at select motor shows around the world. Earlier this month, they spilt the beans on the revamped Infiniti QX80, this time the 2019 Infiniti QX50 has been revealed before its grand unveiling next month in LA.

Along either side, the luxury crossover boasts dark wheel arches, chrome highlights surrounding the windows and following lines running down either side.

Underneath its luscious exterior lies a new front-wheel-drive platform which is said to be 23% stronger than the outgoing model.

What else does the 2019 Infiniti QX50 bring to the table?

Power comes courtesy of a VC-Turbo four-cylinder petrol engine. Pushing out 286 horsepower and 380 Nm of torque, the crossover launches to 100 km/h in 6.7 seconds in front-wheel drive variants and 6.3 seconds in all-wheel drive guises.

As impressive as it is, from a technical standpoint it’s even more impressive. The new engine benefits from a continuously adjusting compression ratio between 8:1 for increased performance and 14:1 for maximum efficiency.

As with other new Nissan models filtering their way onto the market, the 2019 Infiniti QX50 benefits from ProPILOT semi-autonomous driving technology which allows drivers to sit back and relax and let the onboard computer system to control steering, braking and acceleration on single-lane highways.

Stay tuned as the new 2019 Infiniti QX50 will be fully revealed next week in LA and will most likely go on sale shortly afterwards or in 2018.

Dubicars.com has new Infiniti and used Infiniti for sale in Dubai, Sharjah, Abu Dhabi and Ajman. 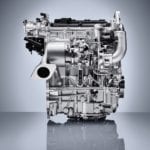 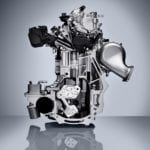 2019 CLS teased once again before global debut in LA