Remember the gorgeous Jaguar C-X75 sports car that stole the limelight in James Bond’s Spectre? Of course, you do because you really wanted to own one and would do anything for one. Jaguar doesn’t want to give it to you, though. Instead, they want you to choose between an SUV or sedan or both.

Recent statements from the company have them looking ahead, and that electric cars are the future as they want to have a full sized SUV presumably larger than the current F-Pace crossover and a fully electric successor to the Xj sedan all before the start fo the next decade. Jaguar is aiming, to launch the vehicle in 2019, just beating the Porsche Misson E.

It is interesting to note that the upcoming sedan is to follow a similar design package to the Porsche Panamera leading to quite the rivalry when launched. Let’s hope if this is the case, they follow the 2017 model and not previous models.

The C-X75 has been in the media even before the famed British Spy hit the silver screen as it surfaced long before that in 2010 as a concept and a potential future part of the British manufacturer’s lineup. Although five prototypes were built, the project was canned due to unknown reasons.

It’s not just the mouth-watering sports car that is to be scrapped; the XK successor has fallen to a similar fate.

Looking for a British car? We’ve got new Jaguar and used Jaguar for sale in Dubai, Sharjah and Abu Dhabi. 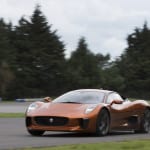