After a leak a few days ago, the wraps have officially been lifted from McLaren’s latest hypercar, the McLaren Speedtail.

With its extended flowing bodywork, the Speedtail is a remarkable vehicle in a number of ways. McLaren hasn’t revealed full details regarding the car but has stated it will feature a top speed of 403 km/h thanks to a new hybrid drivetrain which is said to push out 1,036 horsepower.

Every body panel on the model is constructed from carbon fibre and is designed to reduce drag. You may notice there are no side mirrors. Instead, McLaren decided to use retractable rearview cameras to aid the aerodynamic performance of the vehicle. The British manufacturer has also fitted static front wheel covers which also aid the aerodynamics.

Inside, the iconic McLaren F1’s three seating arrangement returns with the driver sat right in the middle of the car on a seat made from custom carbon fibre. On either side are additional seats wrapped in directional leather which allows passengers to slide in and keep them in place when in motion.

A new drive mode has been added to the Speedtail and is known as Velocity. By activating the Velocity drive mode, the vehicle drops closer to the ground by 35mm, and the engine prepares its self for high-speed driving.

Now we know what your thinking, “how and where can I get my hands on one of these?” Well, we hate to be the bearer of bad news, but only 106 McLaren Speedtail hypercars will be built, and all are spoken for already.

Customers who were lucky enough to order one have been given free reign when it comes to customising their Speedtail leading to no two looking identical inside and out.

McLaren was kind enough to spill the beans on how much one example will cost; $2.24 million or AED 8.2 million!

With very few being produced and at least half of those will be stored away in a garage for safekeeping, we’ve got a feeling least one or two will be spotted somewhere in the UAE.

But we’ll have to wait until 2020 to catch our first glimpse of the Speedback.

Dubicars.com has new McLaren and used McLaren for sale in Dubai and Abu Dhabi. 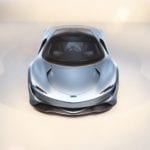