Fans of the all-electric company have been begging Tesla to build a new Roadster ever since the first generation was discontinued in 2012. Based on the Lotus Exige, it was the first fully electric convertible in the world and fans can rest easy as a new one is indeed on the way.

Set to launch as a 2020 model, this time Tesla has built their new Roadster from the ground up, and it’s certainly a head turner.

While it is sure to turn heads on every street corner, how fast it sprints from 0-60 mph may cause onlookers heads to literally fall off as the new Roadster achieves the feat in an eye-watering 1.9 seconds! That is before hitting a top speed of 250 mph.

According to Elon Musk, the new Roadster has a 620-mile range on full charge.

Despite what appears in images, the model is actually a four-seater. However, you’ll have to squint as they are pretty small.

During the prestigious event, Tesla also unveiled their long-awaited fully electric truck cab. According to the American manufacturer, the rig will be able to travel 500 miles (804.6 km) on a single charge when towing 80,000 pounds (36287 kg) worth of goods plus the trailer itself.

With that in mind, the truck can launch to 96 km/h in 20 seconds. Unhitch the trailer, and the Semi launches to 100 km/h in just over five seconds! That’s quicker than most petrol cars.

Dubicars.com has used Tesla for sale in Dubai and Sharjah. 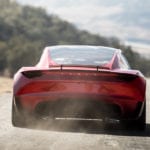