There are just a few hours between now and when the 2018 BMW M5 will make its global debut. However, this is the age of the internet and someone got their hands on pictures earlier than expected. Instead of keeping them locked away, they’ve decided to share them with the world.

BMW’s latest offering of the M5 boasts the traditional double kidney grille finished in black with chrome trim, redesigned front fascia with larger intakes to suck in cool air and sleek laser lights flanking either side.

Leaked images show off a stunning set of black and silver alloys on each corner with gold brake calipers. It’s not known if these rims are standard, but they sure do suit the 2018 BMW M5.

Around the back, quad exhaust tips, black rear diffuser and a perfectly sized rear spoiler complete the exterior.

Final specifications of the vehicle will be revealed later this week, but we do know what powers the 2018 BMW M5. Lurking beneath the bonnet is a 4.4-litre V8 twin-turbo petrol motor.

Instead of pumping out a mere 560 horsepower, BMW has cranked the dial to 11 and has managed to squeeze 600 horses to pump through the executive sedans veins along with 700 Nm of torque.

Mated to an eight-speed M Steptronic gearbox channelling power to all four wheels, the 2018 BMW M5 launches to 100 in a lightning quick 3.5 seconds or less.

As we’ve previously posted, the 2018 BMW M5 drive mode selector will allow drivers to select from to 4WD modes and a single mode to drive power to the rear exclusively. 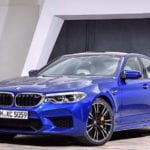 2018 Porsche Cayenne takes on the extreme 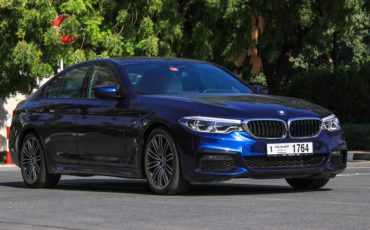 For almost 40 years, the 5-series lineup has been the go-to mid-sized executive saloon. A popular…