Rumours have been circulating for some time that Ford is to remove the supercharger from the Shelby Mustang GT500 and replace it with twin turbochargers instead to provide an extra kick.

Spotted driving casually through the streets of America, a test mule from the Blue Oval has been spotted wearing a mask to cover its front end.

Underneath the camo is said to be larger air-intakes at the bottom and a larger hood scoop cut into the bonnet, support the rumours of twin turbo power. Ford appears to have attached a large rear spoiler to keep the upcoming sports coupe stuck to the ground. Each corner has their rims covered in performance rubber and behind those rims are Brembo brakes.

Powering the rear wheels is said to be a V8 engine singing a different tune to the one found in the GT350R beast with sources claiming that both will have identical engines with the GT500 outputting a couple of extra horses.

With the twin turbos attached, horsepower power figures could match those of the Dodge Challenger Hellcat and Chevrolet Camaro ZL1 of which Ford are already involved in fierce competition with their standard sport coupe models. Look for 640 to 750 horsepower to be pushed through those tailpipes.

Secondly, stuck on to the window is “TT-0081”. Last time Ford had a similar sticker, a twin turbocharged engine was in fact under the bonnet of the vehicle. Said vehicle was a Ford Raptor SVT and powering all four wheels is a twin turbo engine.

No price has been announced for the upcoming machine and no official launch date has been set in stone.

Looking for an iconic American Muscle? We’ve got new Ford Mustang and used Ford Mustang for sale in Dubai, Sharjah and Abu Dhabi. 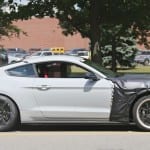 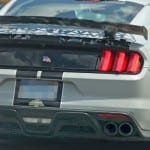