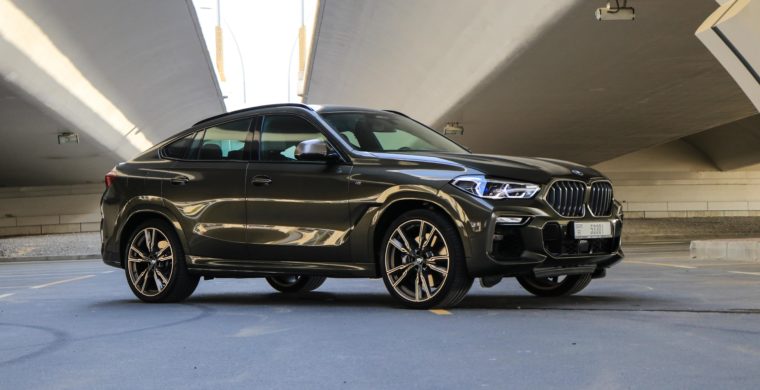 Introduced way back in 2008, the X6 always came across as a wide one. What exactly did BMW have on their mind when they thought of combining an SUV and Coupe. Whatever it was, they were on to something. Twelve years later the model is still going strong and sports a fresh face, crisp lines and plenty of power.

BMW has come along way with X6, and the model still runs rampant in the segment despite facing stiff competition.

As always, a huge shout out to BMW Middle East for allowing us to take the vehicle out.

Want to make room for the X6 in your garage? Sell your car faster with Dubicars.

With all that out of the way, join us and find out if the 2020 BMW X6 50M is worth your time or do others offer a better package?

When it comes to large SUV’s and handling, the Germans really know what they are doing. The X6 remains planted to the ground despite its size and weight.

Power comes from turbocharged V8 that cranks out a cool 523 horsepower and delivers power to all-four-wheels via an eight-speed automatic.

No matter the drive mode you select, when inside, it feels more like your sofa at home. It’s comfortable, and the massaging seats will make you want to stay in the car forever, even on longer journeys.

We’re glad BMW hasn’t decided to go with that ridiculously large grille for the X6 as the moderately sized double-kidney sit sloped slightly forward at the top and adds to the aggressive nature.

Aggression isn’t just found at the front; it works it’s way to the end flowing through muscular shoulder lines and straight into the rear taillights.

It doesn’t matter where you look; the BMW X6 is just plain angry. In a good way of course and we must say, the current generation is the best looking to date.

Parking the car at night brings out a little more in the car as the grille is illuminated, making it easy to spot.

The auto tailgate features hands-free operation. All you have to do is swing your foot from one side to the other to open or close the boot, making heavy loads easier to load and unload.

Where do we start? The interior, in short, is nothing short of extravagant. Luxury and comfort oozes all over the place, and the centre console is incredibly captivating. The way it shimmers is just gorgeous.

The jewel styling continues to the start/stop button and media controller. As standard is BMW’s latest iDrive system shown via a 12.3-inch touchscreen that can be used by the previously mentioned controller, steering controls or hand gestures if you are brave enough.

Both front sports seats can be toggled to keep you cooler during the summer heat, and as we mentioned before, they both have massagers fitted with over five configurable modes.

The second row is spacious in both the leg and headroom departments and passengers in the second row have access to two touch screen screens (optional extra).

Similar to the front console, the rear ones are just as fluid and offer a range of applications plus the option of HDMI input.

The vehicle luscious sloping roofline doesn’t comprise rear boot space, but the 2020 BMW X6 holds up against some 7-seater SUV’s and offers a supreme 580 litres.

Serving as the flagship SUV coupe, the X6 M50i has whatever you could imagine a fully-fledged safety package would include. The only thing that comes to mind that is missing is autonomous driving, but in a sense, it does have a form of autonomous driving.

It can’t be activated when driving, but I can be used to park the car. Sticking the vehicle in reverse gives you the option of both park assist and reverse parking, but they can’t be on at the same time.

Park assist just displays more on the screen and doesn’t control the car. The reverse system does, and it is smart enough to park the car itself in reverse.

On top of that, the usual safety gadgets are there to keep you warned about your surroundings and to keep you in line.

Of all the fastback/crossover SUV’s currently in the market, the X6 sits at the very top and is undoubtedly a vehicle that is suited for daily driving, dropping the kids off at school and a little fun on the weekend.

On gadgetry alone, the BMW X6 50M sits far ahead of the competition. Unlike many Sport Coupes, five occupants can sit in comfort no matter where they sit.

We say it’s worth the price! We’d even go as far as to say we’d choose it over the X5.