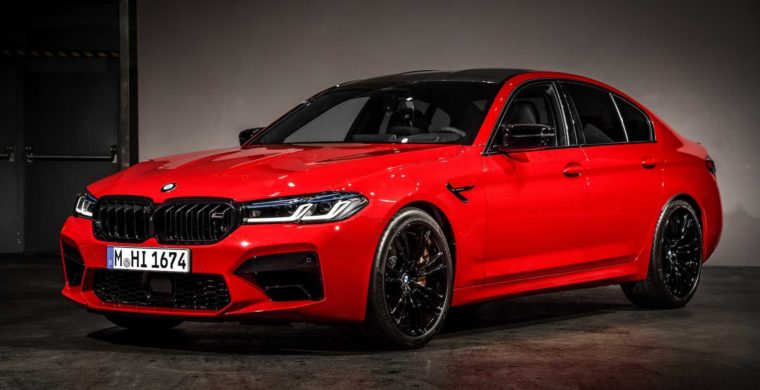 In case you missed it, last week after a big leak online, BMW officially revealed the 2021 BMW M5. Following in the footsteps of the facelifted 5-series, the high-performance four-door features an updated grille and headlights.

On top of the styling upgrades, the M5 is now available in five new exterior colours including Brands Hatch Grey, and Motegi Red Metallic. 20-inch wheels are also newly available and are borrowed from the M8.

The changes inside are minimal with drivers encasing themselves in a familiar cabin with a larger 12.3-inch infotainment system which now has Android Auto and cloud-based navigation. The upholstery is new, and the centre console now has two new buttons; one for vehicle settings and another for M mode.

Carrying over from the outgoing model is the twin-turbo 4.4-litre V8 powerplant. Generating 592 horsepower and 750Nm of torque, it remains connected to an eight-speed automatic gearbox and sends power to all four wheels and is rear-biased.

Despite the two having different power outputs, the M5’s top speed is electronically capped at 250 km/h. But if you want to go faster, the optional M Driver’s Package allows you to go 305 km/h.

Competition variants of the M5 have a fine-tuned chassis and feature new shock and a recalibrated damper control system that is said to “enhance ride comfort during high-speed highway driving as well as over bumps.”

In Germany, the 2021 BMW M5 is set to arrive in August and in the US shortly Afterwards. Expect the new M5 to arrive in the UAE and other GCC regions later this year or early next year.

Dubicars has new BMW and used BMW for sale in Dubai, Sharjah, Abu Dhabi and Ajman.

Buying a car during Coronavirus; a complete guide

Parking fees to revert back to normal starting from July 1st