An exciting teaser image has appeared on the Ferrari website claiming a new Ferrari vehicle is on the way.

Tucked away in a part of the website dedicated to owners of at least one Ferrari car, the image doesn’t show the upcoming model, but it does give us an indication of when the exotic Italian manufacturer will unveil the model; September 17th.

Going under the codename of Ferrari F176, the teaser also features two words “Icona Ferrari” with Icona meaning icon in Italian. Presumably, the new Ferrari won’t be brand new from the ground up as it is speculated it could use the 812 Superfast as a starting point.

Select sources have revealed it could be called the Ferrari 812 Monza and that the sports car will benefit from different styling both inside and out, along with a handful of mechanical changes.

Even though the new Ferrari is set to debut in just over a months time, no one outside of the Maranello headquarters knows whether or not it will be more powerful compared to the 812 Superfast.

The Ferrari 812 Superfast took over from the F12 Berlinetta as Ferrari’s flagship model for all and uses a naturally aspirated 6.5-litre petrol engine mated to a seven-speed dual-clutch transmission. With 789 horsepower travelling to the rear axle, the 812 Superfast sprints from 0-100 km/h in a blink and you’ll miss it 2.9 seconds before reaching a top speed of 340 km/h.

Mark down the 17th of September 2019 in your calendar!

Dubicars.com has used Ferrari for sale in Dubai, Sharjah and Abu Dhabi. 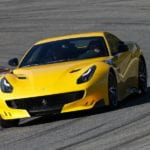