45 Years ago, Nissan‘s first Skyline GT-R rolled off the production line. Since its inception it drove, raced and barreled its way into to petrolheads hearts around the world. I may be too young to remember the first few generations but I sure remember the R32, what a car that was. Briefly taking a break in 2002, Nissan split the GT-R and Skyline name and re-launched the series simply as the GT-R in 2007. It made a name for itself very quickly and proved worthy of its ancestors.

Now entering its eighth year of production, only minor changes are present in the 2016 GT-R. A bump up in horsepower and four new 20-spoke 20-inch RAY wheels with Dunlop rubber filled with nitrogen are what’s new. Inside the cabin it’s identical to the 2015 model with no enhancements to the infotainment system, you can still connect a phone via Bluetooth though. Four trims will be available at launch starting with Premium, Gold Edition, Black Edition and the highest trim being NISMO. All trim levels come with the same 3.8 litre twin-turbocharged six-cylinder petrol engine. Black, Gold and Premium variants will produce 545 horsepower with a 0-100 time of 3.9 seconds, whereas the NISMO option is tuned by the company to produce an extra 55 horsepower bringing the total up to 600hp and with it the 0-100 time is cut by a small margin. All engines will send power to all four wheels. NISMO has not only tuned the engine for the NISMO version, they’ve added black 20-inch super lightweight forged alloy rims, modified the suspension and added a larger rear spoiler.

Its main rivals on the road are Mercedes-Benz’s AMG GTs and Porsche’s 911 plus a number of others, so we’ve crammed their specs into this table below to compare them with each others base models or models available.

To celebrate the 45th anniversary of the first line of Skyline GT-R’s, Nissan will sell a special model known as Gold Edition built in a limited production to acknowledge the occasion. Finished in Silica Brass, the VIN plate will also bear the colour and a commemorative plaque placed on the dashboard. This marks the second occasion this colour will be used, having last appeared in 2001 on a Skyline GT-R M-Spec. Gold edition will cost 1,000 USD more than the Basic model. It’s unknown how many Nissan plans to build exactly, but 30 are headed to the United States. 2016 Nissan GT-R prices start from 101,770 USD, no release date has been officially announced from Nissan, expect it to arrive sometime late 2015, early 2016. If you are interested in a GT-R have a look at all the new and used Nissan GT-R’s for sale on dubicars.com 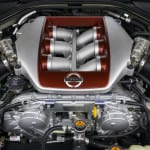 2016 Honda Civic, sportier than ever before