Upcoming 2017 Mini’s may not be receiving additional exterior retouches for this years trim. Instead, the sub-BMW brand has revamped the interior with plenty of the latest tech on offer.

The entire 2017 Mini line up benefit from enhanced instrument dials with crisper visuals and new graphics. During low light situations like night time, visuals will be displayed in white instead of the current orange shade.

An identical colour scheme is applied to the heads-up display when driving at night. Additional, the key serves as a memory stick for select electronics inside the cabin.

2017 Mini models also benefit from a new fuel display and a repositioned drive mode toggle switch which is now located underneath the air conditioning controls.

For example, data for the drivers desired seat position, mirrors and height of the heads-up display are recorded.

Convertible, two-door and four-door hatchback models benefit from an alertness assistant. Working in conjunction with either the MINI Navigation or MINI Navigation XL system’s, the assistant scans how the car is being driven.

If any anomalies are found such as the driver is losing concentration, the system will alert the driver via a graphic displayed on the centre screen and presumably the dashboard cluster too.

Both the Countryman and Clubman can be fitted with the Media Pack XL or Tech Pack which includes one of the hottest must have car features; Apple CarPlay.

All of the above-mentioned upgrades will be available across the 2017 Mini range they launch later this year.

Until these new features launch, grab yourself a new Mini or used Mini for sale in Dubai, Abu Dhabi, Ajman and Sharjah. 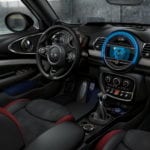