Do you remember last weeks 2018 QX80 tease? You’re not sure, no worries. Infiniti teased a single image for what could be the 2018 QX80 SUV, and we absolutely love it.

However, that seems not to be the case as the luxury Japanese brand has confirmed it to be just a study for the future designed by their in-house studio.

Now you can take this two ways. Either you’re upset with them, or you realise the potential of what that teaser image revealed.

Blacked out A-pillars that gives off the impression of a much larger windshield, sleek redesigned LED headlights, massive front plus a mild refresh giving the behemoth added aggression. All of these features could make their way to the final product; we’ll just have to wait and see.

Now that the brand has shown off more than the front end, we also noticed the re-profiled front bumpers, new rim design, reshaped D-pillar and new highlights running down the SUV’s side. Al of which was not evident in the previous image.

The 2018 QX80 Monograph Concept as it’s known as is scheduled to be detailed in full at this week’s New York Motor Show along with a few other Infiniti models.

We really hope all of these aggressive styling cues make their way to the final product along with hidden elements yet to be revealed both inside and out.

Until we learn more about the concept, we’ve got new Infiniti QX80 and used Infiniti QX80 for sale in Dubai, Sharjah and Abu Dhabi. 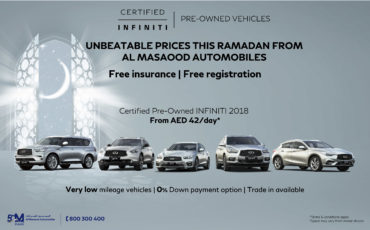