With Pebble Beach in full swing the motoring world was gearing up for the unveiling of the new Bugatti Divo, Pininfarina hypercar and a few other reveals, but no one expected the Ferrari 488 Pista Spider to debut at the prestigious annual event.

But the reveal is only part of the shock.

Ferrari has been hard at work behind closed doors creating the 488 Pista Spider and not only have they cut the roof off and replaced it with an electronically folding one; it’s just as fast in a straight line as the 488 Pista Coupe.

The latest drop-top to join the Prancing Horses stable also happens to be the 50th convertible model they’ve created. Similar to that of the 458 Speciale Aperta, the 488 Pista Spider not only has the new roof to set itself apart but a bespoke livery running the length of the vehicle.

Customers can also swap out the stock rims for one-piece carbon fibre ones.

It will also feature a number of aerodynamic and styling changes compared to the regular 488 GTB, most notably the front fascia, redesigned bonnet, side skirts, carbon fibre rear diffuser and exhaust outlets.

Ferrari hasn’t revealed pricing for the 488 Pista Spider or if it will be a limited production similar to its predecessors, the 458 Speciale Aperta or 16M Scuderia Spider.

Dubicars.com has new Ferrari and used Ferrari for sale in Dubai and Abu Dhabi. 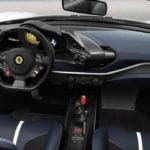