AMG’s four-door sports car or the Mercedes-AMG GT4 as it’s currently known as has been a talking point in the automotive industry since it’s inception not too long ago, and we’ll catch a glimpse of it sooner rather than later.

Next month at the Geneva Motor Show, the German Manufacturer will finally remove those pesky black and white stickers and is expected to fully reveal the Mercedes-AMG GT4 at last.

Based on what’s been spotted in the past, underneath the camouflage is an aggressive front end with a Panamericana grille with eye-catching headlights. Styling cues borrowed from the CLS and AMG GT infuse together to create a flowing roofline and sloped windshield.

The four-door model also benefits from a unique rear end with a twin-exhaust pipe setup flanking either side with signature AMG GT-style taillights lighting up the rear.

Will the Mercedes-AMG GT4 takeover from the CLS Classe?

According to Tobias Moers, CEO of Mercedes-AMG, Mercedes will discontinue the CLS 63, and in its place, the German marque will usher in the CLS 53 benefitting from a hybrid twin-turbo 3.0-litre V6 engine.

The Mercedes-AMG GT4 is expected to be powered by familiar 4.0-litre BiTurbo V8 petrol engine. Mercedes has yet to confirm exact outputs, but identical engines powering the E 63 and E 63 S produce 563 horsepower and 604 hp respectively.

Additionally, a hybrid variant is also said to be in the works with a similar 4.0-litre twin-turbo 4.0-litre V8 paired with an electric motor. This should allow the eco-friendly four-door to launch to 100 km/h in a quick three seconds thanks to 800 horsepower.

Dubicars.com has new Mercedes and used Mercedes for sale in Dubai, Sharjah, Abu Dhabi and Ajman. 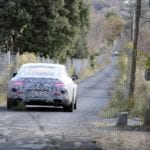 Order your new Audi A8 in the Middle East now!