With the Audi E-Tron officially in production, it was only a matter of time before the production version of the Mercedes EQC broke cover and yesterday was that day.

Unveiled in Sweden for the first time, the all-electric German crossover boasts a large black panel surface connect the LED headlights. But that black panel is not just for show, its filled with fibre optic lights which lights up during the night.

Most crossovers have roof rails for owners to strap stuff to the roof, but the EQC doesn’t have any as Mercedes have intentionally left them off to improve aerodynamics. The wheels are also aerodynamically optimised, lightweight and available in various sizes ranging from 19- to 21-inches.

While the cabin does seem similar to other Mercedes models, the EQC has a few difference’s here and there, One of the more noticeable ones are the rose gold accents on the air vents, and the ribbed pattern wraps around the entire dashboard and parts of the doors.

Other features include a configurable ambient lighting system and bespoke seats not seen on other models with blue or beige centres, wood trim, Burmester sound system and more.

Mercedes will offer three distinct styling packages for the EQC. Starting with the AMG Line Exterior, a single bar front grille sits between the headlights; a sportier front bumper sits just below and around the back, the package adds a custom rear with an integrated rear diffuser. Customers can also order 20- or 21-inch AMG wheels.

The last of the three packages is the Electric Art package. This one adds more rose-gold accents to the cabin.

With no fossil burning properties, the Mercedes EQC draws power from electric motors fixed to each axle. Producing a combined 402 horsepower and 765 Nm of torque, the all-wheel-drive system allows the EQC to launch from 0-100 km/h in 5.1 seconds before hitting a top speed of 180 km/h. Equipped with an 80 kWh lithium-ion battery pack, the all-electric Mercedes is capable of traversing more than 450 km.

While the EQC is AWD, Mercedes have said the electric crossover is mainly front-wheel drive as during low and medium demand conditions; only the front motors are used to improve efficiency.

Regarding charging, the Mercedes EQC is fitted with a water-cooled onboard charger with a capacity of 7.4 kW. By using Mercedes’s Wallbox, charging is three times faster, and according to the German manufacturer, the vehicle’s battery can be charged from 10 – 80 per cent in roughly 40 minutes.

The Mercedes EQC will be produced on Bremen, Germany an at the Bejing Benz Automotive plant in China. Pricing or availability has yet to be announced although they will most likely be revealed in the coming months.

Dubicars.com has new Mercedes and used Mercedes for sale in Dubai, Sharjah, Abu Dhabi and Ajman. 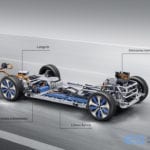