Three weeks ago, Mercedes took off the wraps and unleashed the beast that is the Mercedes-Benz AMG GT R. Unveiled at Goodwood Festival of Speed in a similar fashion to a James Bond film, no one knew just how many were to be built, the majority of us thought thousands will be built. That’s not the case anymore, though.

At the wild unveiling, Mercedes said that the beast would not be a limited production. However, recent reports suggest that the German manufacturer has reverted the design and could limit the production to just 2000 units.

There are a number reasons why the German icon has done it. One: is to make the car as desirable as possible as everyone knows, items that are limited edition customers snap up immediately. And as the years go by, prices soar to new heights even exceeding double it’s original value.

The second reason is to keep the cars in the hands of clients you will use the machine to its full potential. Mercedes also went on to say that they believe most if not all of the green beasts will spend most of their times achieving the perfect lap time on closed tracks.

This isn’t the first time we’ve seen this over the past two years as similarly Porsche originally planned to keep the Cayman GT4 production for a while. Instead, they reverted the decision and are planning to stop production just shy of 2,500 units. 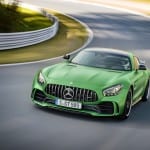