Range Rover’s 2018 lineup is set to expand later this year with the recent tease of the Range Rover Velar destined to fill a large void in the luxury SUV’s manufacturers department.

The name comes from the first Range Rover prototype back in the 1960’s and once launched will hunt down the Porsche Macan and BMW X4.

Not much is known of the Range Rover Velar with the brand releasing one teaser image, a timeline of all of their models and their upcoming family tree where we can see the Velar slots in between entry-level Evoque models and Sport SUV’s.

A selection of four-cylinder and V6 motors are said to be available to power the wheels, and the Range Rover Velar is to utilise similar components to the Jaguar F-Pace including the aluminium packed frame aiming more towards a performance market instead of off-road use.

We can’t rule out the potential of the supercharged V8 motor and a plug-in hybrid powertrain to keep the vehicle fresh.

The single teaser image released shows off a birds-eye view of the Range Rover Velar and shows off the unique rear end complete with LED tail lights to set the vehicle apart.

More information about the models is scheduled to drop on March 1st.

Until then we’ve got new Range Rover and used Range Rover for sale in Dubai, Sharjah, Abu Dhabi and Ajman. Mercedes unveils not one but three 50th Anniversary AMG models

Did Ford slip up and reveal a Competition GT? 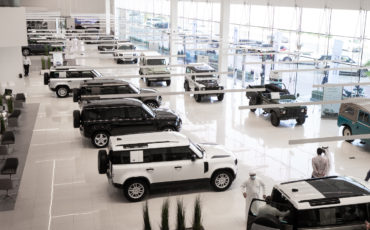