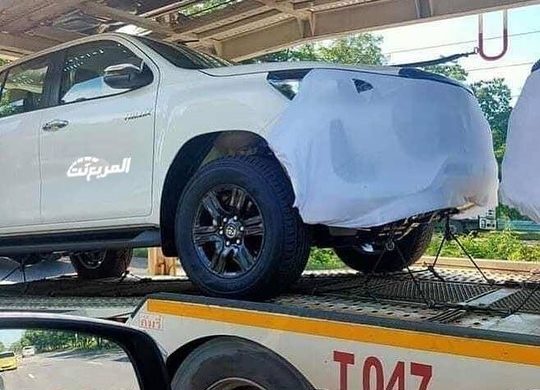 Not too long ago, renderings of the 2021 Hilux surfaced online showcasing the model receiving a facelift for the next model year. It appears what the images depicted are true, at least for the front end of the ever-lasting pickup.

Almurba, a prominent Instagram user got a hold of three new images of the new Hilux which partially reveal the new version.

One picture shows the front end of a red model boasting a big grille with horizontal slats, chrome trim around the fog lights and a larger Toyota emblem.

The paint finish appears to be one of the two new Premium Colours called Emotional Red II.

Two other models were snapped as well. A white and grey model. Although both have white stickers on the front and back. While on the grey model, it’s hard to spot the new lights, the white model clearly shows the revised grille but with a black surround.

According to the original post, the 2021 Hilux is set to debut later today after a teaser last week confirmed the date.

Export cars, why buy from the UAE?

How to check car accident history in UAE