With all the massive auto manufacturers using various acronyms such as R for Volkswagen, N for Hyundai, M for BMW and the list goes on. Infiniti also has it’s very own high-performance division which will add an S to the end of the vehicle’s moniker.

Three tiers are to be available from Infiniti’s S division, and each has uniquely coloured letters. Base models are silver whereas blue badged S cars will run on a hybrid powertrain. Red S letters are reserved for all other vehicles.

Infiniti Q60 S models will be the first to arrive sporting a red badge on the rear end. Powered by a twin-turbocharged V6 motor with a 3.0-litre displacement, 400 horsepower power is sent to the rear wheels. Available in coupe from, it’s set to rival the BMW M4. Shortly after launch, potent Q50 S models are scheduled to chase the BMW M3 with an expected uprated four-cylinder motor.

Over the next few years, it’s expected that hardcore and track-ready models will eventually filter into the S brand once they debut.

When the first vehicles of the new series are set to roll put are unknown and as for price we can expect a premium over standard models.

One performance model we and many of your readers want to see is the gorgeous Eau Rouge which unfortunately was dead on arrival as the Japanese luxury division cancelled the project before it even hit the showroom. Leaving many of us disheartened, we could see it live again with just dressed a little different. 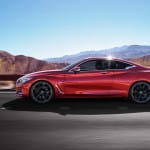