A few months ago, we got news that a Range Rover coupe is on its way to duke it out with the X6. While we are not entirely sure why Land Rover has to create a whole new model when they have the Evoque already in its lineup, this model is set to launch in 2017 as a 2018 model.

With a launch date set for next year, it gives rivals an advantage regarding sales, but Land Rover may have the upper hand on launch. With an all-aluminium platform, the British company are aiming for a luxurious style more than a practical one, as, from the front, hints of Evoque and SUV models are instantly recognisable.

As soon as the roof meets the A-pillar, it already starts slanting towards the tailgate and is notably shorter at the rear than SUV models.

It’s not just the BMW X6 that this model will take away customers from, Mercedes GLE coupes are prime targets too. No price is known as of now, however, seeing as both it rivals have a small premium over their SUV counterparts, Range Rover could do the same.

Expect similar features to Range Rover SUV models both inside and out. Cooled front seats, rear entertainment package, 360-degree camera, fridge and so on.

Powering the coupe is said to be a choice between a four or six-cylinder petrol and diesel engine, with the highest output being around 300 hp. Potentially a V8 and plug-in hybrid are both plausible, and it’s too early to cancel out an SVR model. 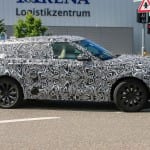