What are customers saying about the Mercedes-Benz C-Class

Adam - Nothing can beat a second hand C63 AMG. It’s powerful, looks and sounds amazing and on top of all that it still has many luxury options.
Pros: Resale value, options, noise and looks.
Cons: Price.

Aziz - The C250 coupe is great, the turbocharged four-cylinder motor is fuel efficient, and the car looks great and handles like a dream.
Pros: Looks great.
Cons: Interior is outdated after only a few years.

Basher - I got my pre owned C43 AMG for a good price, and it’s a fantastic car, even though it’s old it still looks good to date and the engine is still powerful.
Pros: Handling and engine power.
Cons: Small boot area.

With all that covered you’ve got to browse our inventory of used Mercedes S Class for sale in Dubai, UAE.

About the Mercedes-Benz C-Class

C-Class models were introduced in 1993, taking over from the 190 series. It’s seen multiple generations to date and over the years have produced some of the most memorable Mercedes-Benz vehicles to date such as the C 63 AMG. It’s hard to believe up until the late 90’s; C-Class models served as the entry-level cars of the entire Mercedes lineup before the A-Class was introduced. As with every vehicle on the road, there are plenty of rivals trying to take away sales including the BMW 3 Series, Lexus IS Series and the Audi A4. 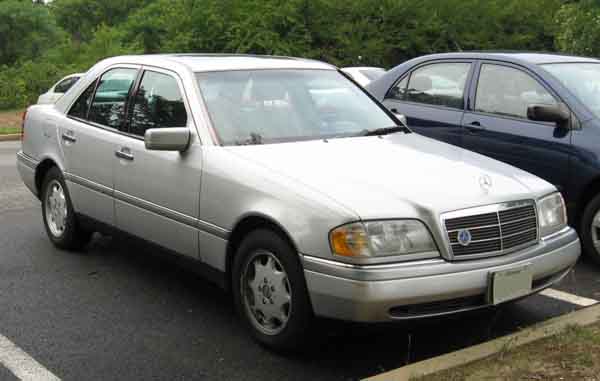 Entering the market with a boxy rear end and a slightly rounder front end, they struck up quite a resemblance to other Mercedes vehicles in the lineup. Standard features included fabric seats, basic power accessories and a radio tuner. Optional extras included a sunroof, cruise control, navigation, Bluetooth options, powered seats and leather seats.

In 1997, C-Class models received a minor update that included darker tail lights and a selection of new rims.

A 1.8-litre motor powers C 180 models, C 200 models have 2.0-litre four-cylinder motors, C 220 have 2.2-litre I4 engines, and C43 AMG models are equipped with a 4.3-litre V8 pumping out 306 horsepower. Power is sent to the rear wheels via standard five-speed manual transmission or an optional four-speed automatic. Over the years, a five-speed automatic and six-speed manual transmission were both on offer. 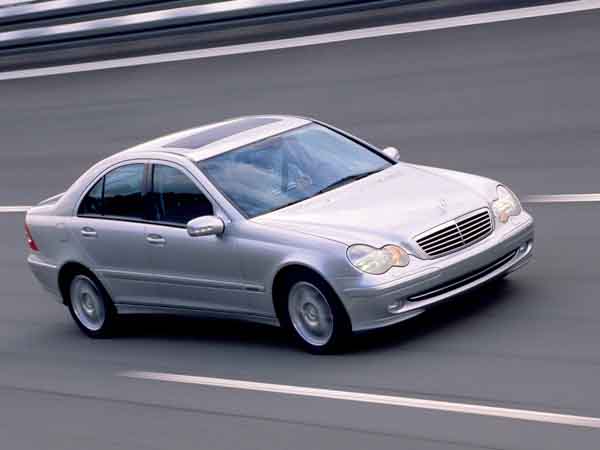 2005 saw the C-Class receive a refresh mainly to the interior with a lite touch up to the front end. Bluetooth pairing and USB inputs were added to the optional extras list. 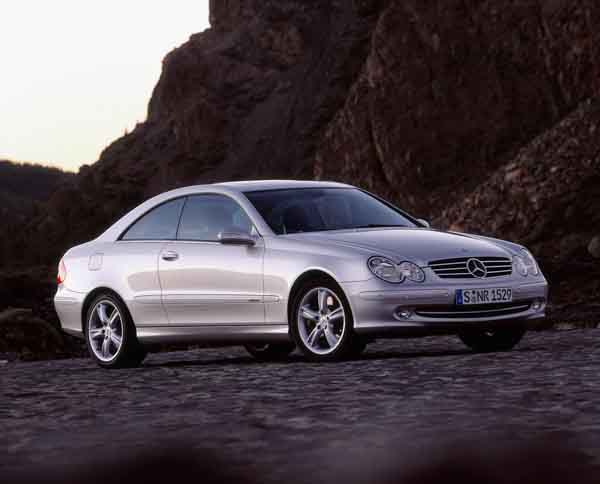 This generation introduced us to the C-Class coupe body style. With either a four or five seat setup, standard features and additional features remained similar.

Most of the previous generation models remained with the C43 AMG model being the only casualty as it’s replaced by the C55 AMG equipped with a V8 5.5-litre petrol motor. An additional V6 3.2-litre engine dubbed as the C32 AMG. The previous engines did receive minor upgrades all around, and a few displacements are altered. Aside from the removal aload of models and engines were added; C 230 models joined in midway through the life cycle with either a 2.3-litre turbocharged petrol engine or a 2-litre inline-4 motor. C 240 models came with a 2.5-litre V6, C 280 models are equipped with a 3 litre V6 and C 320’s have a 3.2-litre V6 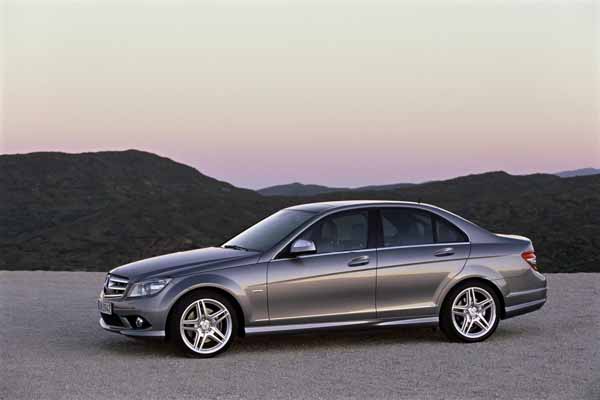 Another generation and another redesign, however, all the interior options and exterior options remain the same. Options such as parking sensors, reverse camera, memory seats, navigation and Bluetooth became standard on top of the range models as did leather seats.

2008 introduced us to the maniacal C 63 AMG. Featuring identical bodywork to standard C-Class models, these sporty sedans had cuts and bumps in the bodywork, a rear spoiler, 19-inch alloys, unique badging, sports seats and other optional extras, plus a much more aggressive exterior. 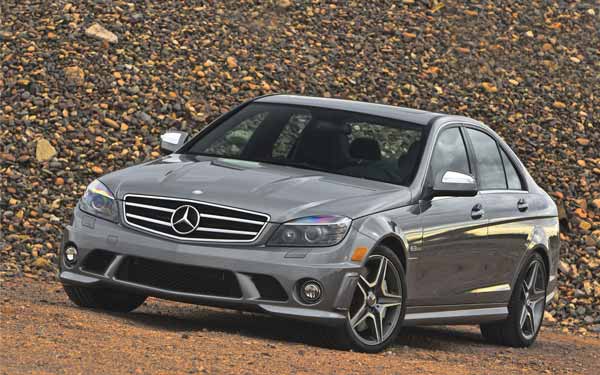 A coupe C63 AMG is available as well with an optional Black Series model, which features even more, unique styling to give it more of a race car look, two seats, massive rear spoiler and roll cage.

All but one model and engine carry over to this generation, with the C32 AMG being dropped from the lineup. Changes were made to upgrade fuel efficiency and output. One new engine does join the list; 6.2-litre naturally aspirated V8 engine pumping out a mega 457 horsepower enabling a 0-100 km/h time of 4.5 seconds! A 503 edition is also available which increase output to 503 hp! C 350 models are also available in this era.

Prices in this generation start from AED 43,000. 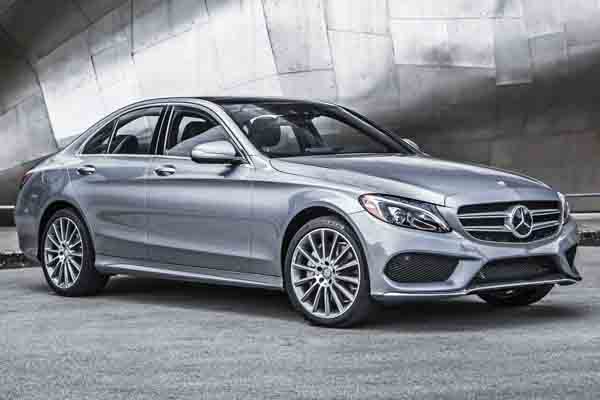 With a complete overhaul for the entire C-Class range, new headlights, front grille and rear lights are added to the other shell. With a multitude of new materials used inside and out, the German manufacturer decreases overall weight by 100 kilos.

All standard features return across the board with a wide variety of additional options including heads-up display full LED headlights, COMAND system with touchpad, reverse camera, leather upholstery, navigation, spoiler and more. 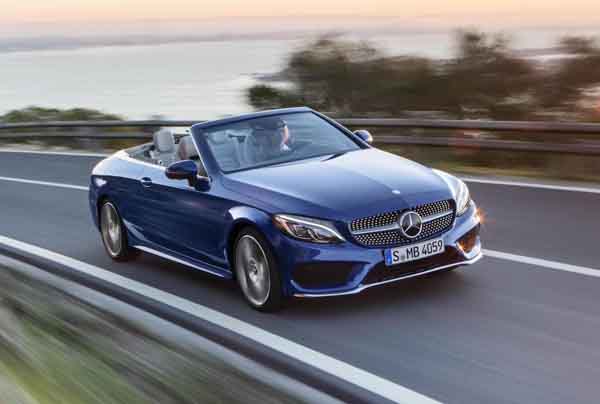 This new generation introduced the world to the C-Class convertible. With a four-seat setup, all the standard features were made available along with all the optional extras. While they do strike up a similar resemblance to the S-Class coupes, C-Class models feature the new grille with diamond shaped inserts and unique headlamps to set it apart from the top of the range models. Wagon models are also available but are few and far between in the GCC.