What are customers saying about the Hyundai Elantra in Dubai, UAE

Bilal - When I wanted to buy used cars everyone told me import Hyundai Elantra GL 1.8L is the best choice for the UAE. I got one for a good price and everyone these cars are spacious, good on fuel and great options but some interior pieces aren’t so good.
Pros: Fuel, maintenance and style.
Cons: Hard plastic materials.

Ameen - I want to buy a second hand Elantra 2.0L GL as I rented one previously. Amazing cars especially inside. Very comfortable for a mid-size vehicle and the exterior looks good, not to mention good price too.
Pros: Comfortable interior and exterior styling.
Cons: Power isn’t too good.

Waddah - Pre owned Elantra cars or better than any other mid-size cars. I bought a Limited Full option model and hadn't looked back since. Leather seats and all, all my friends want the same!
Pros: Resale value, looks and interior options.
Cons: Base model safety features.

Five reasons to buy a Hyundai Elantra in Dubai, UAE

About the Hyundai Elantra

Debuting in the 90’s, it serves as an entry-level sedan to rival multiple sedans that dominate the streets of the GCC. It only made an impact in the UAE in its fifth and sixth generation as it was given a major overhaul that caught the attention of everyone. Since then, the Elantra has climbed the ladder of success and is nipping at the heels of those rivals mentioned below.

Around the world, the vehicle may have driven around in the background and not really caught the attention of those buying, but over the years, the vehicle has proved hugely popular and has even won several awards from top publications including Car Of The Year. 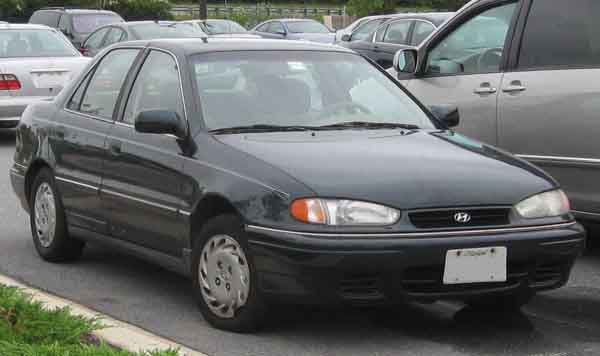 Entering its first generation, the Elantra made its debut as a typically styled sedan that got the job down and wouldn’t break down while carrying five people. Available in individual countries around the world, standard features included fabric upholstery and standard accessories. Optional extras include a sunroof, radio tuner, ABS, front airbags, power mirrors, and alloy rims. Some of which became standard features as the years went by.

These models are powered by an inline four-cylinder petrol engine with various displacements while hooked up to an automatic or manual gearbox and powering the front wheels.

1993 saw the Elantra receive a facelift which added the companies updated logo to the grille and reworked the front and rear ends. 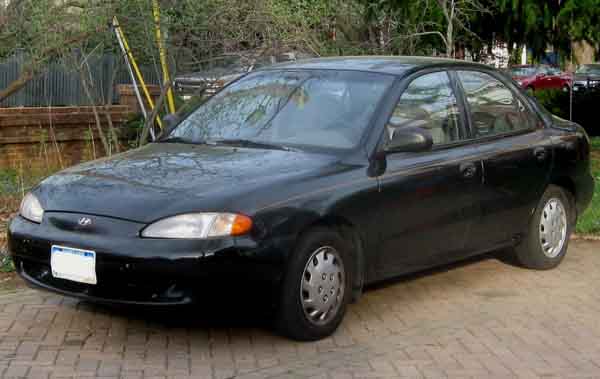 In its second generation, Hyundai radically changed the exterior to give the vehicle a smoother, more rounded look to appeal to customers during the time of boring boxes. Available in sedan or station wagon shapes, sales continued to grow for the brand. Not only the exterior but the interior received a touch up as well to draw in even more sales.

Power in these models is taken from a four cylinder motor with various displacements under the 2-litre label. All could be mated to a manual or automatic gearbox channelling power the front wheels.

In 1998, a new face was tacked on both body types as was a new engine with a high displacement.

Four cylinder motors were retained once again with front wheel drive layout mated to either a manual or automatic gearbox. With various displacements, the station wagons also came equipped with an optional four-wheel drive system which is said to be rather rare even back in the day.

Want to buy a pre owned Hyundai Elantra for sale in Dubai, UAE? Prices start at around AED 10,000. 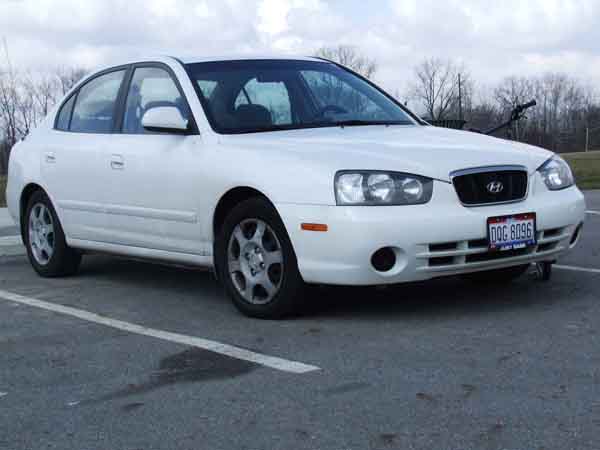 Growing into its third generation, the South Korean generation gave the sedan an all new look to keep the vehicle fresh, all while interior options grew to include front and side airbags, air conditioning, and power accessories. This proved a step in the right direction.

In 2003, the cars received new lights on the front and back, new grill and bumpers. Inside, a new dashboard.

Available in a multitude of trims, GLS sat at the bottom while GT sat at the very top. Fabric seats, CD player and air conditioning are standard with moonroof, traction control, ABS, leather seats, fog lights plus stiffer suspension are optional extras. Further down the line, a Kenwood MP3 CD player became an options extra.

Hyundai also introduced a hatchback version of the Elantra to alongside the traditional sedan.

Powering the front wheels in this era is a four cylinder motor with displacements ranging from 1.6 to 1.8-litres. A choice between manual and automatic gearboxes control the power.

Want to buy a second hand Hyundai Elantra for sale in Dubai, UAE? Prices start at just under AED 10,000. 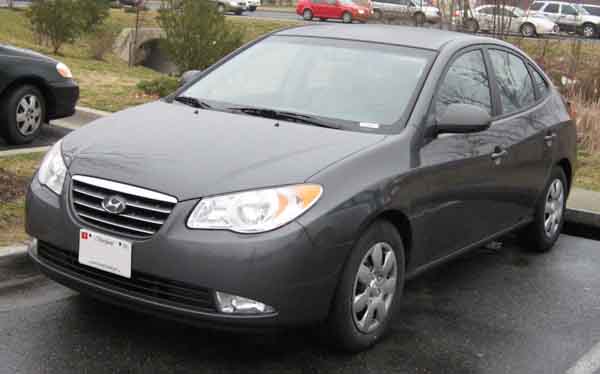 Debuting in New York, the Hyundai Elantra once again received an overhaul with many referring to its new look as a coke bottle styling. Both front and back headlight housings grew; new bumpers appear all around, and a brand new interior appears with similar options to those found in previous models.

Oddly enough, certain countries didn’t offer air conditioning as standard features but instead handed at front and side airbags and ABS. While the vehicle received facelifts over the years much like any other car, options inside improved for all trims. Electronic Stability Control, parking sensors, Navigation, Bluetooth. Cruise control modes, media inputs, xenon headlights, sunroof, leather upholstery and heated seats joined the mix.

The hatchback version was dropped in select countries in favour of its own lineup known as the Hyundai i30.

Powering the front end of the Elantra is 1.6 or 2.0-litre petrol engine mated to either a manual or automatic gearbox. A Hybrid version also exists and is an export vehicle. 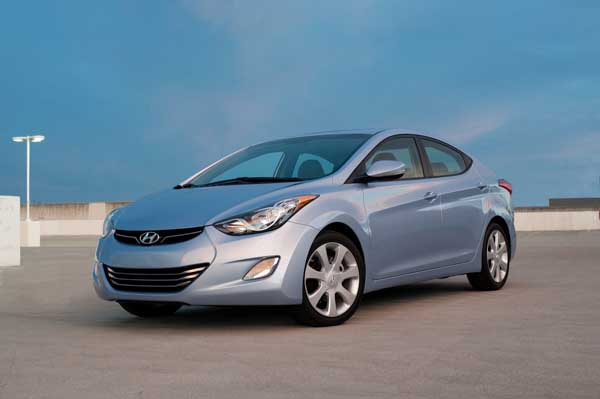 This is where it all took off for the GCC, now in it’s the fifth generation, the Hyundai Elantra once again sports an entirely new shape which we all know and love to this day. Out of all the sedan’s in this generation and the price bracket it holds, this is one of the better-looking ones and is surprisingly roomy inside.

With elegantly crafted curves all around, in 2013 the vehicle underwent a facelift giving the four-door sedan a new face, darker taillights and an uprated engine under the bonnet.

At the start of the generation, GLS took the helm as the base model until, 2014 where it was renamed SE and a new Sport trim was added. Basic specifications include fabric upholstery and air conditioning, Optional extras that come standard on higher tiers include AUX and USB inputs, Bluetooth, cruise control modes, leather seats, power seats, heated seats and sunroof, In 2014, LED headlights were made available alongside new rims, navigation and a premium sound system.

Hyundai not only sold a sedan in this generation, but they also sold a Coupe which is still in production in some areas. While sporting a similar design, the rear doors are clearly missing, and it has a more aggressive appearance. Interior and exterior options remain identical.

Would you like to buy used Hyundai Elantra for sale in Dubai, UAE? Prices Start at AED 21,000. 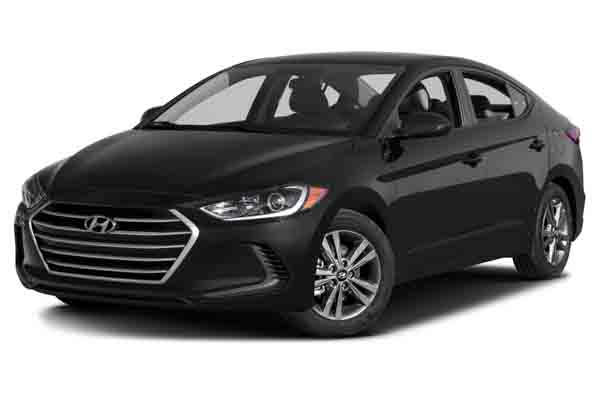 In its sixth generation, the Hyundai Elantra once again went under the knife and received a massive overhaul once again. Gone is the sleek free flowing bonnet which has now become flattered at the front end with a new grill and headlights in place. The rear end is completely new rear end complete with tail lights.

Powering the mid-level sedan is a 1.6 or 2-litre four cylinder motor. This time, three gearboxes are available including the traditional automatic and manual plus a DCT or Dual Clutch Transmission.